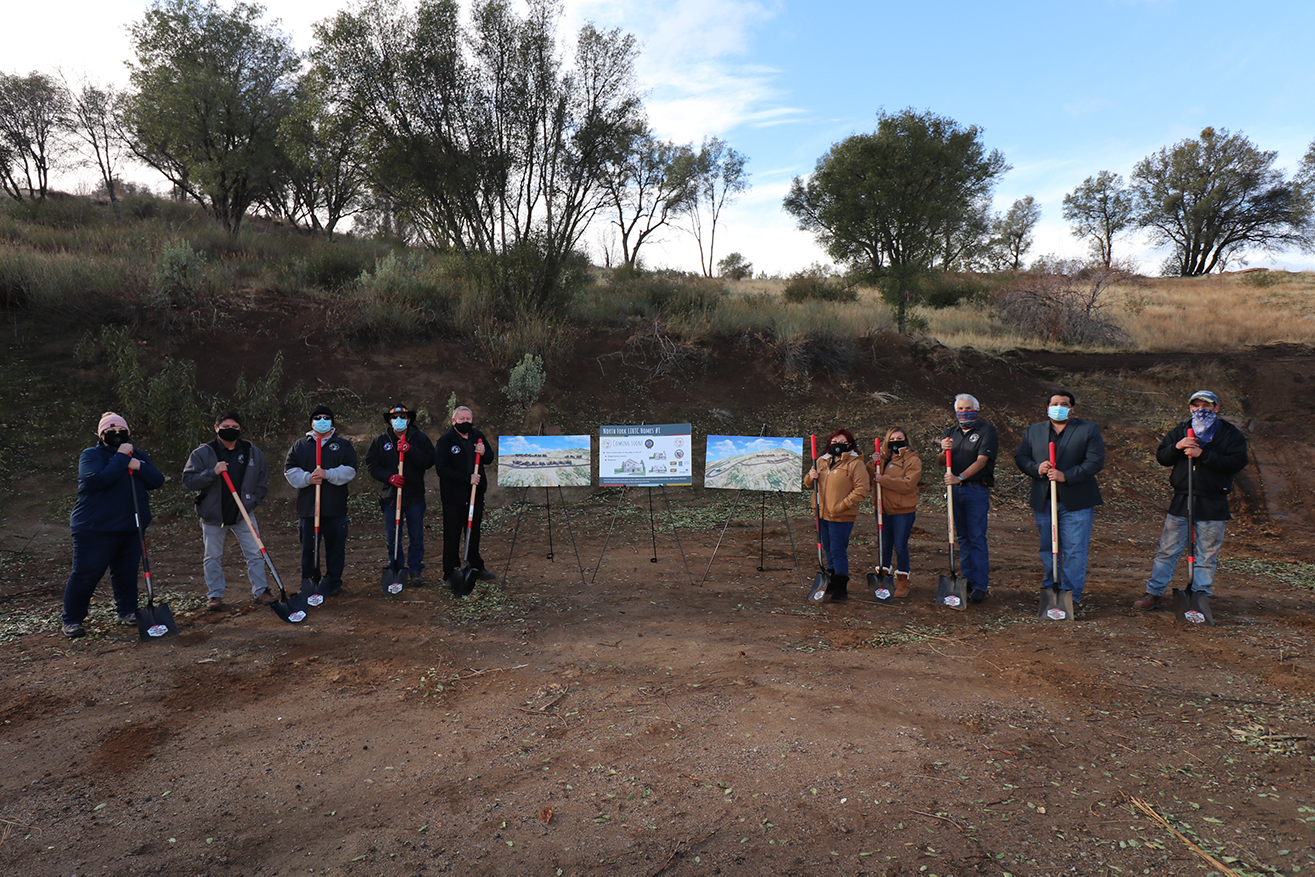 The ‘North Fork LIHTC Homes #1’ Project is groundbreaking, in many ways.

NORTH FORK, CA — 2/02/2021 – The North Fork Rancheria Indian Housing Authority (NFRIHA) held a groundbreaking ceremony on Friday, January 22, 2021 for a new $16.4 million affordable housing development on tribal lands in North Fork, CA. The project, referred to as ‘North Fork LIHTC Homes #1’, will include 19 structures, made up of both single-family homes and duplexes, and provide 26 new affordable housing units for tribal citizens. Construction will begin in early 2021 and be complete by December 2022.

The new development is NFRIHA’s first Low Income Housing Tax Credit (LIHTC) project, a joint state and federal program designed to promote private investment in affordable rental housing for low-income Californians. The project received a 2020 LIHTC award from the California Tax Credit Allocation Committee (CTCAC) and generated $10.6 million in investor equity from RBC Community Investments (RBC). It is only the 11th tribal project to be awarded credits by CTCAC since the Native American set-aside was established in 2014.

The development is the result of over two decades of planning and efforts by the Tribe to improve and provide affordable housing and address substantial structural obstacles. “Lacking a tribal land base, we acquired the development property in 2000 and placed it into federal trust in 2002,” said NFR Tribal Chair Elaine Bethel-Fink. “Lacking casino resources, our Tribe and Indian Housing Authority have leveraged limited funding sources to develop 14 prior housing units on the site, a community center, family wellness youth center, general store, playground, and supporting infrastructure.”

According to Paul Irwin, NFRIHA’s Executive Housing Director, the North Fork LIHTC Homes #1 project will include 7 duplexes and 12 single-family homes, with units ranging in size from 1-4 bedrooms, as well as accessible housing units. The geography of the development site is unique, requiring significant engineering and facility upgrades including road, water, and sewer infrastructure. Homes will be built into the mountainous landscape with views of the Sierra Nevada. All homes are designed as two-story structures due the site’s topography and to limit earthwork and impacts to the surrounding landscape. The NFRIHA and Tribe already own and operate 33 existing affordable housing units total, and the additional LIHTC units will significantly increase our housing stock and ability to meet tribal housing needs.

The NFRIHA has partnered with Travois for consulting and architectural services. Travois is a Certified B Corporation focused exclusively on promoting affordable housing and economic development for American Indian, Alaska Native and Native Hawaiian communities.

“Travois would like to congratulate NFRIHA on its first LIHTC development,” said Trent Rogers, senior project manager for Travois. “The housing authority’s two-decade community vision is coming to fruition through hard work, innovation and perseverance. We are proud to be a partner in this development!”

“We are excited to team with the NFRIHA and Travois on a project that will substantially benefit the local tribal community. We recognize the significance and impact this project will have for tribal members,” said Luis Gonzalez, Project Manager for Blair, Church & Flynn. “It’s been a pleasure to be a part of such an exceptional team.”

“RBC Community Investments is proud to be a partner in NFRIHA’s first LIHTC development” said John Galfione, a Director at RBC. “We are excited to see the project come out of the ground and welcome families in need of high quality, affordable housing to their new homes.”

About the Low-Income Housing Tax Credit

The housing credit provides the private sector with an incentive to invest in affordable rental housing for low-income families. Since President Reagan signed it into law in 1986, the housing credit has financed the construction and preservation of more than 3 million affordable homes nation-wide, at a rate of nearly 100,000 per year. Today it produces virtually all new affordable housing and is the nation’s primary tool for preserving existing affordable housing. The housing credit supports low-income families, veterans, people with disabilities and seniors in rural, suburban, urban and tribal communities. For more information, visit www.rentalhousingaction.org/about-lihtc.

The North Fork Rancheria of Mono Indians of California established NFRIHA as its Tribally Designated Housing Entity (TDHE) to implement and fulfill the tribe’s housing programs and goals. NFRIHA continues to serve as an agency of the tribe and an arm of the tribal government in order to further and promote the tribe’s objectives in the area of Indian housing and community development. NFRIHA is a governmental agency of the tribe, overseen by a board of commissioners that is appointed and directed by the tribal council. NFRIHA’s primary duty is to carry out and administer the tribe’s Indian Housing Block Grant (IHBG) Program from the U.S. Department of Housing and Urban Development (HUD). For more information, visit www.northforkrancheria-nsn.gov/iha.

About the North Fork Rancheria of Mono Indians of California

The North Fork Rancheria of Mono Indians is a federally recognized Native American tribe with over 2,200 tribal citizens and government offices in Madera County, California. Since the restoration of its federally recognized status in 1983, the Tribe has established modern tribal governing institutions to improve the lives of its tribal citizens, many of whom have limited access to basic housing, healthcare, business, employment, and educational services and opportunity. The Tribe leverages its limited federal grant funding to operate numerous tribal programs (more information available at www.northforkrancheria-nsn.gov/